A “people-powered initiative”: The history of waste equity policy in New York

A “people-powered initiative”: The history of waste equity policy in New York 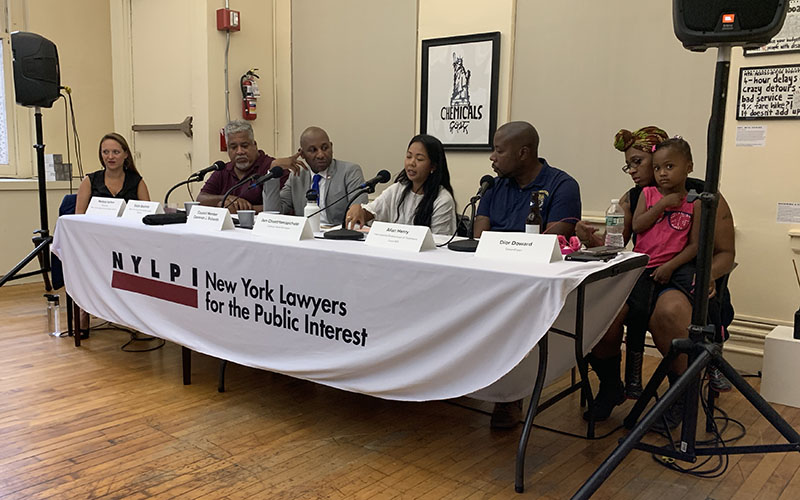 Our pop-up social justice museum was packed tonight for a discussion about using innovative policy solutions to advance the goals of sustainability and equity in New York.

You can watch video of the discussion here.

Eddie, who used to work at NYLPI, talked about the challenges facing New York’s waste streams. New York’s waste industry “used to be run by the mob”, he said. “Tony Soprano’s business was commercial waste.” He covered the history of waste disposal in New York, which went from dumping waste into landfill to pushing it by truck into three communities: the South Bronx, North Brooklyn, and Southeast Queens, to eventually transferring waste by barge from equitably-sited transfer stations around the city, thanks to a waste equity bill passed by city council.

Councilmember Richards praised the coalition that has worked on these issues over a generation. Waste equity has been a “people-powered initiative” weighing a host of competing interests against one another, he said.

“It took a bunch of us being brave to stand up and say ‘you know what, this is not right’,” he said. “South Bronx, North Brooklyn, and Southeast Queens are majority communities of color, and we were literally being dumped on. I remember going into St. John’s Hospital and seeing babies hooked up to tubes having asthma attacks because of the number of trucks coming into these communities. It wasn’t right.”

Now, commercial waste zoning is the next step for the movement for waste equity, he said.

Jen spoke about what led her to found Clean Up North Brooklyn, as an organizer.

“I stood on one corner and counted 30 trucks in 30 minutes,” said Jen. “Waste reform has meant less trucks on our streets, which means it’s safer. And I just started talking to people about what was wrong, and how we could fix it.”

She talked about conditions on the ground in North Brooklyn, where residents often shared the same issues, such as not wanting to open their windows all summer because of the smell. Having to hop over huge puddles of “garbage juice”, the leaching juices coming out of garbage, and becoming nauseous from the smell, she said, led to more in-depth organizing and working to overcome the problems. It also led to teaming up with NYLPI to file a lawsuit against one operator.

“The lawsuit just really validates our voices,” she said. “It gives people a lot of hope that the quality of life could really be improved.”

Allan worked in the industry, and recalled how he was saying to himself one night that he realized “people might die” if there wasn’t an effort to clean things up, in terms of worker conditions. He went to city council hearings with workers who got fired for speaking up about waste reform, he said, and praised city council members for standing up for waste reform in an industry that’s historically been against reform. “It was just mind-boggling to me how bad the situation was,” he said. “And I praise the city council members who stood up with workers and had our backs.”

“There was always this conversation about farm to table,” said Dior, talking about how she got into conversations about how to change the waste stream in the Bronx. “But what about table back to farm? How do we close that loop back up? That’s how I got involved in this.”

“If we can get the organic stuff out of the waste stream, then we can keep the rats out,” she said. “We want to be able to create jobs where workers are owners of what happens with their labor, and what we see as part of the solution is really localizing a lot of this stuff.”

The panel also discussed worker exploitation, and how it intersects with the exploitation of communities.

“This is a systemic problem,” Eddie said. “We didn’t get here overnight. There was a quantum leap on this when we got council members like Antonio Reynoso and Donovan Richards who were born and raised in these communities. Antonio Reynoso grew up in the shadow of these waste transfer stations. He wanted to fix things. He said ‘I want to be on the sanitation committee’, and nobody says that. He did it.”

In particular, small businesses will benefit from commercial waste zoning, the panel agreed.

“Any time you try to reform an industry, they’re going to say ‘you’re trying to stop me from buying my fifth yacht’, he said. It’s important that the community is with us on these bills, and it’s important to educate your community members about these bills.”

“If we stand firm, this will move,” he said.