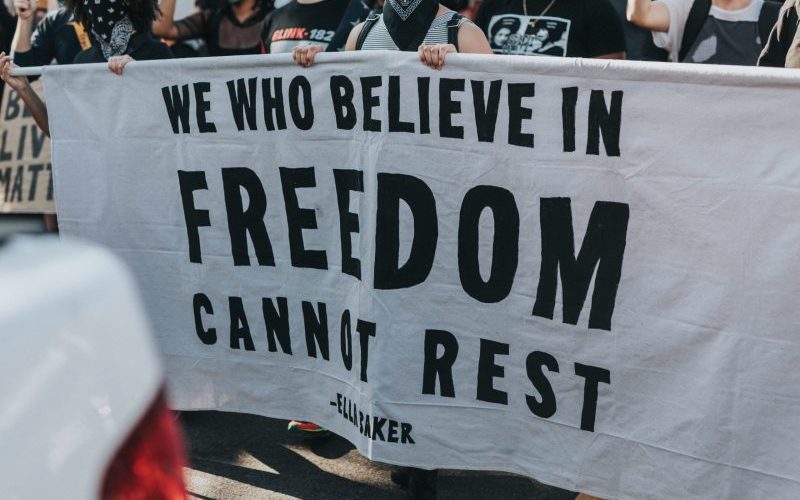 On Saturday, May 14, a white supremacist New Yorker murdered ten people and shot three others in an anti-Black, racist attack at a Buffalo grocery store. Hate crime doesn’t begin to describe one of the deadliest racist massacres in American history. Nearly all of the victims were Black, targeted by the shooter because of the color of their skin after reconnaissance in the neighborhood the day before. The 18-year-old wore body armor and posted a manifesto subscribing to the racist “replacement theory,” elements of which are now commonly and hatefully spread by many leaders on the right.

White nationalism is on our doorstep and on the lips of too many leaders. It cuts to the core of our communities’ right to lived equality, and we join together with them in grief, rage, and resistance.

Our hearts go out to the Black communities in Buffalo as well as our close partners there. We link here the statement released by our friends PUSH Buffalo that includes resources and actions that you can take in solidarity.

Professor Eddie Glaude Jr once wrote, “I never really had faith in the United States in the strongest sense of the word. I hoped that one day white people here would finally leave behind the belief that they mattered more. But what do you do when this glimmer of hope fades, and you are left with the belief that white people will never change – that the country, no matter what we do, will remain basically the same?” These words are as hard to write down as they are to read – yet the recent act of white supremacist terrorism in Buffalo vindicates this sentiment. And it seems that for all the Black prophets and thought leaders, from Douglass to Du Bois, Hamer, Lorde, and Wells-Barnett, that blessed this nation with their wisdom, admonishments, and pleads for us to come together, their corpus of work and the legacy of their very lives have fallen on deaf ears.

Perhaps Professor Glaude is referring to the fact that since the supposed racial reckoning of 2020, too many in the local, State, and national polity have responded by promulgating draconian policies that seek to contract the ability to vote, deny self-determination for transgender youth, pillage the ability for women to make decisions about their own bodies, enjoin the full and true teaching of this country’s racist history and present, and increase police budgets despite the fact that necessary reforms have not been implemented.  These regressions and assaults on liberty and inalienable rights are derived from the same origin, white “nationalism,” that has been unchecked, unmitigated, and undeterred for far too long.

White “supremacy” and the paradigm it espouses can no longer be viewed or dismissed as fringe or an outlier – we must face the hard truth that hate is a normalized, everyday feature of American life. It requires little to no effort to find it– it’s professed on major news networks, it’s prominently displayed on popular social media outlets, and it’s used by members of major political parties as a methodology for electoral success.  When fringe elements become mainstream, this is a sign that the nation is on a slippery slope leading to the nadir of white supremacist fascism. This is not hyperbole, because it’s clear that white “supremacy” is ensconced in every institution of the settler-colonial experiment known as the United States – and white “supremacy” appears to be in revelations mode.

Therefore, while far too many extremists are evoking a call to arms, we need more people, especially white people, to espouse a call to duty to identify hate in all forms and eviscerate it with assiduous expedience. This is the work we embark on and pledge to continue at NYLPI. Because first and foremost, we are a civil and human rights organization. And whether it’s fighting to secure sports equity for Black and Latin(o/a) students, advocating for the passage of legislation that better protects transgender and non-binary New Yorkers, or pressing to end New York’s contractual relationship with the U.S. Immigration and Customs Enforcement (ICE), our work is rooted in confronting racism, bigotry, hate, and white “supremacy” in all forms, and we remain steadfast and committed to seeing this work through.

Our hearts and best wishes are with the City of Buffalo, its Black community, and Black people throughout the state and nation who are triggered and traumatized by yet another senseless act of white supremacist terrorism. More than ever it’s incumbent on all of us to understand that the work of racial equality cannot be undertaken intermittently or when it’s convenient. This is a quotidian exercise that requires everyone to realize that it will take all of us to be successful. It’s time for a collective opprobrium for white “supremacy” and the verbal, emotional, and physical violence it engenders.

Ella Baker once offered, “One of the things that has to be faced is the process of waiting to change the system, how much we have got to do to find out who we are, where we have come from, and where we are going.” Her words have never been truer – may they shine a light in the darkness so many are experiencing right now and illuminate the path we must all take together to emancipate our nation and ourselves from the scourge of hate and the cauldron of white “supremacy.”