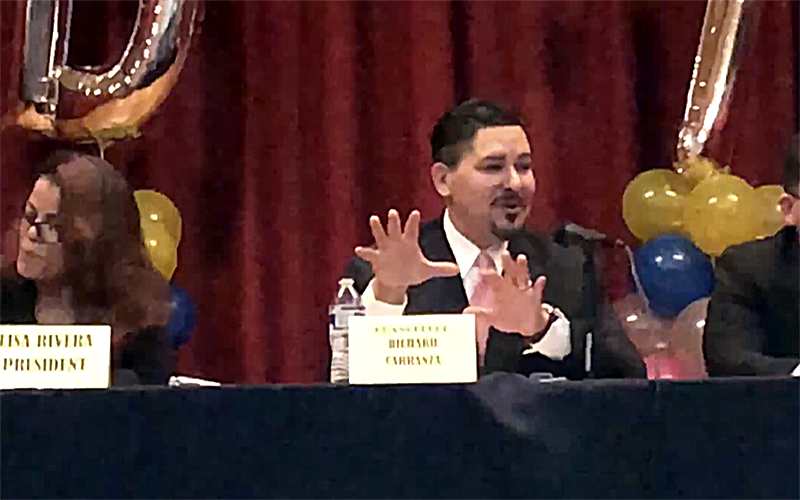 More than 17,000 Black and Latino high school students in New York City attend schools with no interscholastic sports at all. The average Black or Latino student has access to fewer sports, fewer teams, and less funding than students of other races.

But Mr. Carranza, who is Chancellor of the Department for Education, has yet to set forth a plan to stop the discrimination.

You can watch video of his remarks here:

Chancellor Carranza’s pledge to address the unequal system, following NYLPI’s filing suit last summer against the DOE and PSAL, drew guarded praise from champions on the issue, who said it’s good to hear that he understands how important the issue is, but that it still doesn’t help students stuck in an unfair system today.

“It is inspiring to hear a Chancellor speak so passionately about equity and acknowledge both the power of sports and the infuriating injustice of students not receiving equal opportunity to play,” said Fair Play coalition member and long-time sports equity advocate David Garcia-Rosen. “However, until they announce a detailed plan, our students will continue to deal with the present status quo with no concrete knowledge of when it will change.”

The case has drawn coverage from international and national press including The Guardian and the New York Times, and also drew Mayor Bill de Blasio into the spotlight after an exchange he had with one of the plaintiffs, Matt Diaz, on WNYC’s Brian Lehrer Show, which was subsequently covered by the Daily News.

The Chancellor said the DOE has changed the leadership at PSAL and is working with advocacy groups around ideas for creating umbrella organizations to create these kinds of programs. He highlighted meetings with students, and research his department has done into other systems.

Students encouraged parents and attendees of the town hall to pose the questions as part of their work with the Fair Play Coalition.  The Fair Play coalition continues its work with NYLPI and member IntegrateNYC, who is represented by NYLPI and co-counsel  Patterson Belknap Webb & Tyler LLP, and Emery Celli Brinckerhoff & Abady, in the ongoing lawsuit about the inequity in access to PSAL teams, filed last summer.