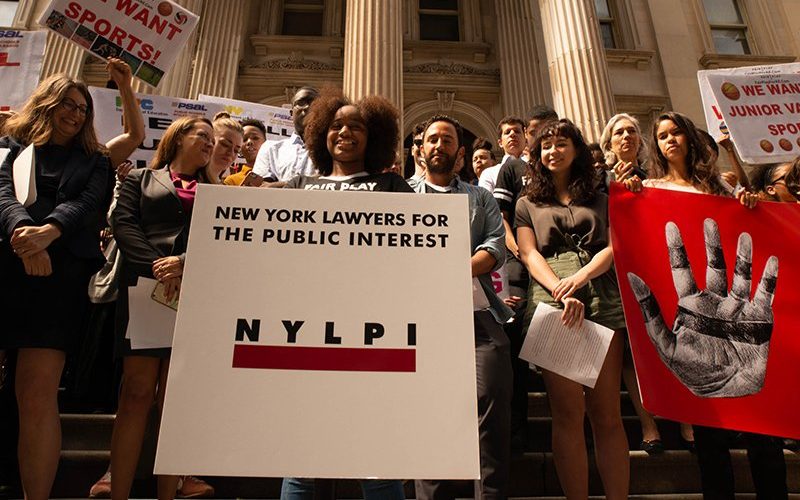 Starting this fall, thousands of Black and Latinx New York City public high school students will have the opportunity to participate in afterschool sports for the first time, thanks to a preliminary settlement agreement reached by New York Lawyers for the Public Interest (NYLPI), the New York City Department of Education (DOE), and the Public Schools Athletic League (PSAL) in a class action race discrimination lawsuit.

“The settlement agreement we filed with the Court lays out a roadmap for more access, greater transparency, and the opportunity for students and their families to voice their feedback to a PSAL system that for too long operated in an opaque, discriminatory fashion. We are proud to stand with student leaders to commemorate this important step towards equity in high school sports.”

“Being part of this lawsuit means the world to me. This settlement is going to provide sports in different areas to make sure that students enjoy their childhood—because you only grow up once. I’m proud and glad to say that I went through hell and back throughout high school to voice myself out for the others, and it paid off.

The proposed settlement creates new and expanded opportunities for Black and Latinx students to play the sports they love, and to have a voice in shaping the athletic programming available to them. A cornerstone of the agreement is the creation of Shared Access Programs (or “SAPs”) grouping small high schools located near one another in underserved, predominantly Black and Latinx school districts to play together under one sports program, sharing a much higher number and variety of PSAL sports teams than any of the schools had on their own.

“More than three years ago, I joined the Fair Play coalition with a sea of joyful Black and Brown youth from the South Bronx to rally on the issue of sports equity, an issue that would become the catalyst to my organizing and set me on the pathway to my career….

There were many times that I felt hopeless and tired—but I am grateful for the team that has come together and made sure that Black and Brown youth have access to sports. Years of dedication from everyone on this team has finally realized one of our biggest and boldest dreams: a NYC with Sports Equity.”