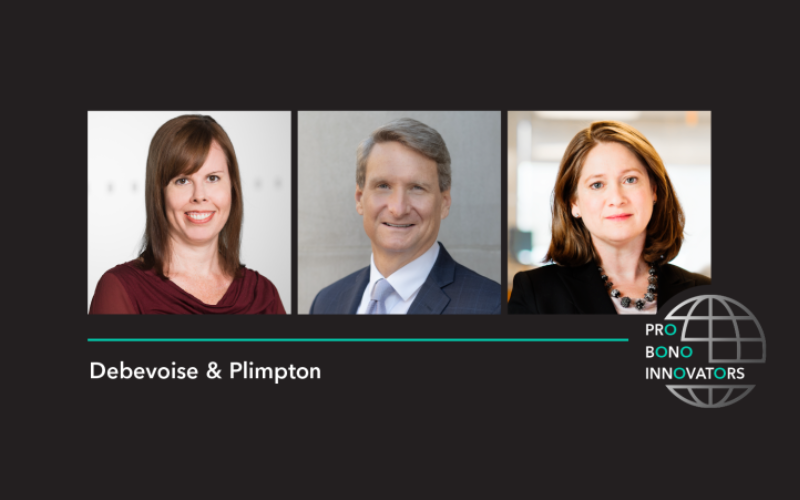 Bloomberg Law named Debevoise & Plimpton as its inaugural 2022 Pro Bono Innovator for the firm’s work defending clients who were wrongfully placed on the No-Fly List, representing professors in free speech challenges at the University of Florida, and advocating for healthcare for those incarcerated in New York.

NYLPI, Urban Justice Center, and Debevoise & Plimpton brought Brad H. v. City of New York to change the practice of dumping people with mental illness on the streets upon release without any plans for continuity of care; many of those people, in dire circumstances, quickly returned to jail or experienced other fallout from untreated mental illness.

Through these efforts, we won a consent decree revamping procedures and providing discharge planning for class members – including efficient Medicaid reactivation — with monitoring through 2020.

To honor the firm, Bloomberg Law interviewed multiple members of the firm including Chris Tahbaz, Partner and General Counsel at Debevoise & Plimpton, and NYLPI Executive Committee member and former Board Chair.  Chris explained,

“We take on impact litigation where we hope to secure positive outcomes for our clients and move the law forward…. When we take on a pro bono matter, we commit to it for the long-term.

Brad H. was a landmark settlement in establishing the rights of incarcerated individuals, which required New York City to provide comprehensive discharge plans when individuals receiving mental health treatment are released from jail. More than 20 years later, we continue to represent the class to ensure that New York City fulfills its obligations in the settlement agreement. In addition, the Brad H. settlement has been a model for recommendations for improvements in other correctional systems.

The state of correctional health services and discharge planning for mentally ill inmates in the city’s custody has improved significantly since 1999 when the litigation began. Incarcerated individuals are no longer released in the middle of the night with nothing more than subway fare. Class members are required to be evaluated and treated by qualified health-care professionals, and under the terms of the settlement, must leave custody with medication, appointments, transportation, and connections to housing and public benefits.”