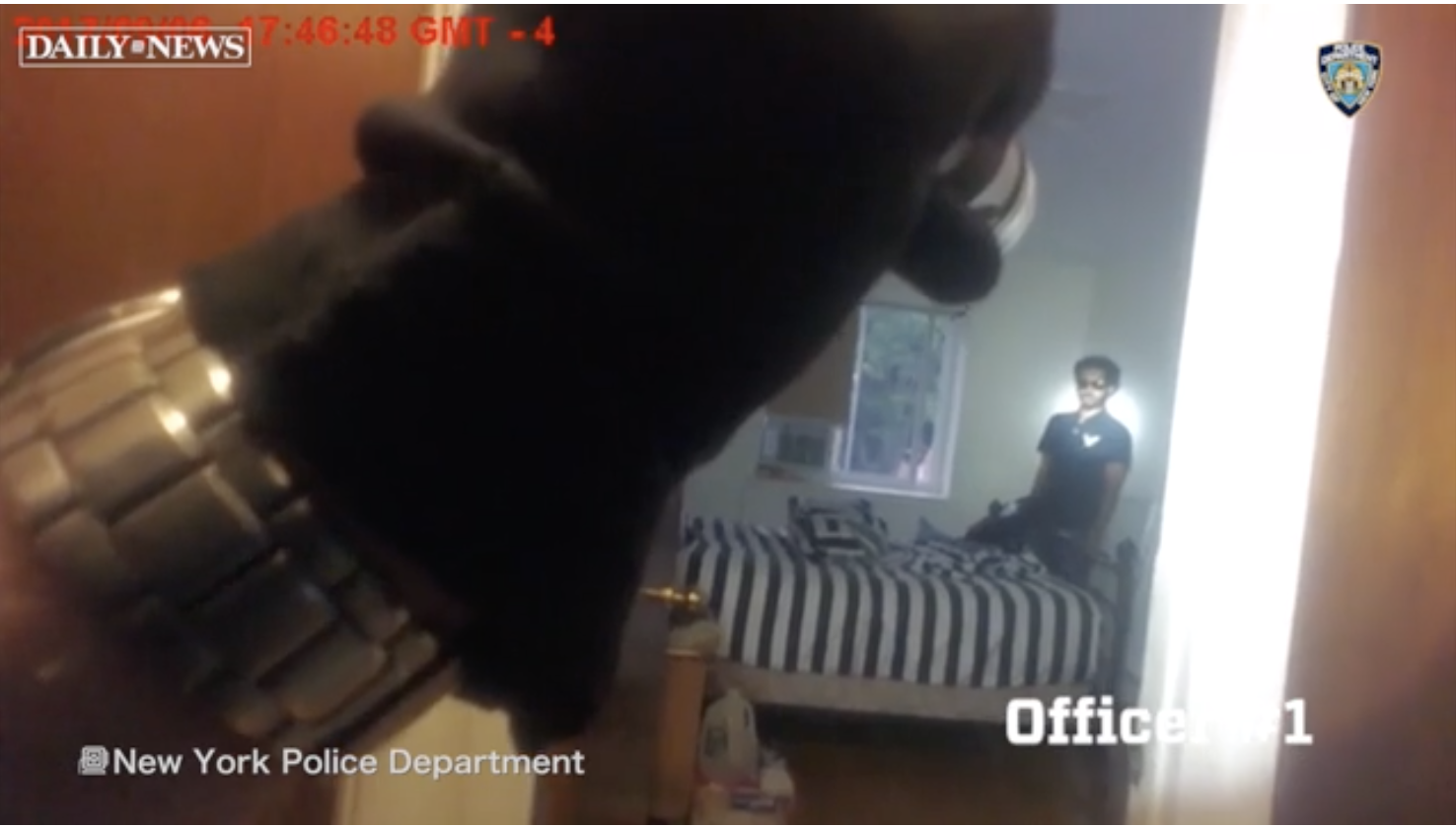 In a landmark ruling for New York’s Freedom of Information law, the New York State Supreme Court has ordered the New York Police Department to turn over unredacted body-worn camera footage in the fatal police shooting of an individual with disabilities, within 30 days.

NYPD released heavily-edited footage to the public after they shot foreign exchange student Miguel Richards 16 times in September 2017, following a 15-minute confrontation in which Mr. Richards stood silent and motionless, holding a knife in one hand, and what turned out to be a toy gun in the other.

The video showed the police did little to de-escalate their confrontation with Mr. Richards, who was experiencing a mental health crisis. Instead, they yelled repeatedly that “this isn’t going to end well”, that he was “seconds away from getting shot” and asking him, “do you want to die?”

The NYPD continued to withhold, blur, and mute more than half the body-worn camera footage of the shooting, despite repeated public records requests by New York Lawyers for the Public Interest (NYLPI) under New York’s Freedom of Information Law (FOIL) for the full footage.

The court ruled in NYLPI’s favor on June 13. A copy of the ruling is available to download here.

Key quotes from the ruling include:

“The notion that the public’s interest to be informed on how the NYPD interacts with emotionally disturbed individuals, ceased after the officers were no longer engaged in firing their service weapons, is contrary to the spirit and intent of the freedom of information laws and the objectives of the BWC pilot program.”
(p. 8)

“Petitioner correctly argues that NYPD’s redactions cloak in secrecy the actions of the police officers in the moments following the shooting, and how the officers continued to interact with Mr. Richards after they shot him.” (pp. 8-9)

“There is significant public interest in disclosing the redacted footage as it would illuminate the
officers’ immediate response after the shooting and their interactions with Mr. Richards who was
fatally shot after apparently suffering from a mental crisis.” (p. 9)

“It is clear from the redacted footage that the officers continued to interact with Mr. Richards and
public disclosure of this footage will contribute to a greater understanding of the incident and
simultaneously promote the key objectives of the BWC pilot program.” (p. 10)

“Respondents have failed to demonstrate that the public’s interest in disclosure of the audio footage is outweighed by the speculative safety concerns raised by NYPD.” (p. 14)

“This is a critical ruling which we hope will stanch the spate of police killings of individuals experiencing
mental health crises,” said Ruth Lowenkron, Director of the Disability Justice Program at New York Lawyers for the Public Interest. “The public’s right under New York’s Freedom of Information Law to view unredacted body-worn camera footage of these tragic incidents is key to safeguarding the very lives of people with disabilities. The tally of police shootings of individuals with mental illness in New York City continues to be unconscionable.”

“The New York Freedom of Information Law has vital goals of transparency, accountability, and responsibility to the public,” said Milbank associate Benjamin Reed who argued the case. “We are grateful that yesterday’s decision requires the NYPD to comply with its obligations under the law. We hope that complete access to the body camera footage of this tragic incident will help to prevent similar outcomes in the future.”

You can download our press release on this news here.

The Daily News covered the story:

The NYPD released body camera footage showing a confrontation in September 2017 that led to police fatally shooting a Bronx man.

A judge has ordered the NYPD to hand over all of its body camera footage pertaining to the fatal police shooting of a mentally ill man in the Bronx nearly two years ago, the Daily News has learned.

Judge W. Franc Perry rendered his decision late Thursday after the New York Lawyers for the Public Interest sued the police department for the video.

The NYPD has 30 days to surrender the full 18-minute recording from the fatal Sept. 6, 2017 clash between cops and Miguel Richards, who was shot and killed by police. Police must turn over footage from all eight officers at the scene, Perry said.

The judge’s order is a “significant development” in the fight to make NYPD body camera footage available to the public, members of New York Lawyers for the Public Interest said.

“We think (this decision) is going to achieve the goals we started out with — to make the NYPD aware that they are going to be held accountable for their actions,” said Ruth Lowenkron, director of the organization’s disability justice program.

“This is not the way the city should be responding to people suffering from a mental health crisis. What we learn from this footage will have a huge positive affect on how best to handle these situations.”

Cops shot Richards 16 times when he refused to drop a knife and raised what turned out to be a toy gun during a tense standoff at an apartment in Edenwald.

Two weeks later, the police released a compilation of body camera footage from the Richards shooting, which New York Lawyers and other mental disability rights advocates said was heavily edited. The NYPD also failed to produce body camera recordings from all of the officers at the scene and wouldn’t release anything from the aftermath of the shooting, Lowenkron said.

The lawyer group’s repeated efforts to get the footage through Freedom of Information Law requests were turned down. When the group sued with the help of lawyers at the global firm Milbank LLP, the NYPD handed over a few more minutes of footage, but not everything.

“We are grateful that this decision requires the NYPD to comply with its obligations under the law,” said Milbank associate Benjamin Reed, who argued the case. “We hope that complete access to the body camera footage of this tragic incident will help to prevent similar outcomes in the future.

The NYPD fought the lawsuit by arguing that releasing all of the footage could be seen as a violation of section 50-a of New York State’s civil rights law, which bars the public release of officers’ personnel records unless ordered by a judge. The department also claimed that disclosing the footage would violate Richards and his family’s “personal privacy” and endanger the life and safety of witnesses.
New York Lawyers for the Public Interest consented to having the witnesses’ faces blurred so they could not be recognized.

In his decision, Perry said the “notion that the public’s interest to be informed on how the NYPD interacts with emotionally disturbed individuals ceased after the officers were no longer engaged in firing their service weapons is contrary to the spirit and intent of the freedom of information laws and the objectives of the body worn camera pilot program.”

On the video that was released, cops could be heard ordering Richards to drop his weapon.

“You’re about a second from getting shot,” one cop says. “Do you want to die?”

The impetus for body-worn cameras dates back to 2013, when Manhattan federal Judge Shira Scheindlin ruled that the NYPD’s stop-and-frisk policies amounted to unconstitutional racial discrimination. Scheindlin called for a federal monitor to oversee a number of reforms, including body camera use.

The NYPD began a mini-pilot program in 2015, then began a department-wide expansion in 2017.

The NYPD has denied requests for release of body camera footage by media outlets and others, citing an ongoing lawsuit by the Police Benevolent Association claiming section 50-a requires the footage to be kept from the public.

NYPD ordered to release all videos from fatal 2017 shooting

A judge has ordered the NYPD to release videos from a 2017 fatal shooting, saying that keeping police footage from the public flies in the face of the key goal of the body-worn camera program: transparency.

The police department must release all of its footage — a total of 48 minutes from eight body cameras — from the fatal September 2017 encounter between officers and an emotionally distressed Miguel Antonio Richards within 30 days, Judge W. Franc Perry ruled Thursday.

“The stated objective of the BWC pilot program is to promote transparency, accountability and public trust-building,” Perry wrote. “The notion that the public’s interest to be informed on how the NYPD interact with emotionally disturbed individuals ceased after the officers were no longer engaged in the fire their service weapons is contrary to the spirit and intent of the freedom of information laws and the objectives of the BWC pilot program.”

New York Lawyers for the Public Interest, NYLPI, had sued for the released of unedited videos in its attempt to increase transparency and advocate for reform in how the city responds to people in mental crisis.

The encounter at hand unfolded on Sept. 6, 2017, after cops were called to at 3700 Pratt Ave by Richards’ landlord, who was concerned for his tenant’s well-being.

Richards was found by officers standing in his dark bedroom with a knife and toy gun.

Ramos deploys the stun gun while the other two officers — Fleming and Redmond Murphy — open fire on Richards, killing him.

On Sept. 14, 2017, the NYPD released edited parts of recordings from four of the eight officers at the scene.

“I don’t want to shoot you. This is not gonna end well for you if you don’t put that down,” Mark Fleming can be heard saying in one of the edited videos.

“You understand you are seconds away from getting shot if you don’t tell us what’s in that other hand. Do you hear me?” Fleming later yells as the standoff intensifies and he and Murphy raise their weapons. “Do you wanna die?”

The next day, NYLPI requested the videos from the additional four body-worn cameras and eventually sued when the full release was denied.

Perry sided Thursday with NYLPI, which described the videos has “heavily edited” and sought to find out what happened after the officers shot Richards, writing in his ruling, “NYPD’s redaction cloak in secrecy the action of the police officers in the moments following the shooting.”

“It is clear from the redacted footage that the officer continued to interact with Mr. Richard and public disclosure of this footage will contribute to a great understanding of the incident and simultaneously promote the key objectives of the BWC pilot program,” he wrote.

Lowenkron lauded the judge’s ruling Sunday, telling The Post the decision is a boon for the public’s access to police records.

“We are happy that the court recognized that these videos should be made available to the public,” she said. “Part of this is to let the police know we are looking into what happened. Nothing can be brushed aside.”

The NYPD did not immediately respond to a request for comment.