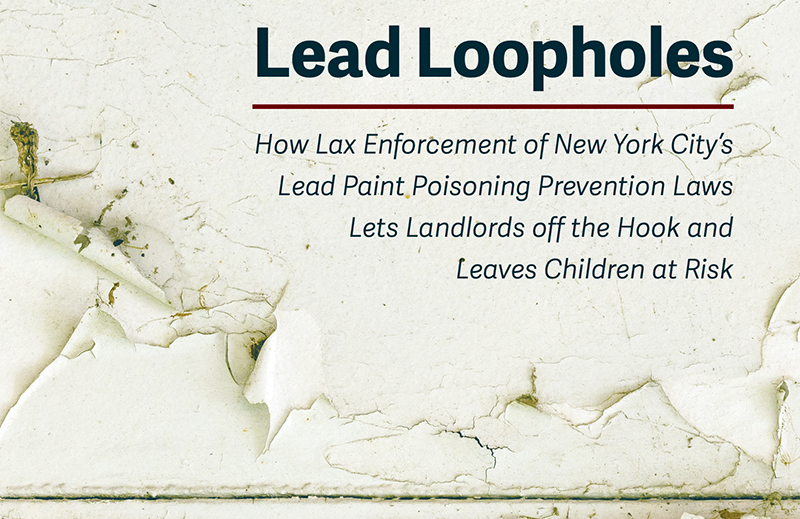 NYLPI and other advocates against lead poisoning in New York welcome the passage of a set of bills in the City Council today that will update and strengthen the city’s lead laws, setting some of the highest standards in the country.

The bills include new guidelines for testing for lead in day care centers, testing for lead in water, lowering the maximum allowable levels of lead dust in apartments and enhanced notification and reporting requirements. The package of legislation also mandates provision public information and outreach programming on lead exposure and city services.

Tenant advocates, legal organizations and environmental groups have been working with the City Council to strengthen the outdated standards in existing lead laws and expand the reach of the laws’ protection. Advocates raised concerns about the lack of robust enforcement of the City’s primary lead law, Local Law 1 of 2004, in the “Lead Loopholes” report released in September 2018. The report showed that despite already having one of the strongest lead laws in the country, the City has failed to penalize any landlords that neglect to conduct mandatory prevention measures like annual inspections for peeling paint.

While the advocates applaud the City Council’s efforts to address lead exposure through the newly passed legislation, they maintain that enforcement by City agencies is critical to achieve the City’s goals of eliminating lead poisoning.

Christine Appah, Senior Staff Attorney with NYLPI’s Environmental Justice Program, said: “Lead exposure can cause intergenerational harm, affecting families and communities. Lead poisoning from household sources like contaminated dust and peeling paint have plagued families for decades. This package of legislation includes many helpful new initiatives but the core issue that the City has been facing is enforcement. We continue to advocate for stronger enforcement and continued monitoring to ensure that the City meets its goal of ending childhood lead poisoning.”

“Tenants throughout New York City, many with children, continue to face lead dust contamination in their homes.  The tenants of Lead Dust Free NYC continue to organize against this serious, longstanding problem,” said Brandon Kielbasa, Cooper Square Committee’s Director of Organizing.  “Landlords who renovate buildings need to follow the law and control the lead laden construction dust this work produces.  When they don’t follow the law, they should face steep penalties and criminal prosecution.”

“We cannot tolerate landlords who poison children,” said Stephan Roundtree, Policy and Advocacy Coordinator at WE ACT for Environmental Justice. “WE ACT welcomes the City Council’s attention to the challenge of lead poisoning, but it’s crucial that actions taken are sufficient to change ongoing bad behavior and hold landlords accountable when they flout the rules.”

“If properly enforced, the lead dust standards adopted by the City Council will be the strongest in the nation,” said Ben Anderson, Director of Poverty and Health Policy at Children’s Defense Fund-New York. “Dust generated from lead-based paint is the most common source of lead exposure among young children, so the new provisions have real promise. The key will be what action the City takes when landlords fail to comply with the law and dust levels exceed the thresholds.”

Julie Tighe, President of the New York League of Conservation Voters, said, “One of our top priorities is protecting children from the irreversible damage caused by lead poisoning.  We thank Council Speaker Corey Johnson and his City Council colleagues for focusing on this important public health issue. As our coalition’s report on lead poisoning in NYC showed, the main source of children’s exposure to lead is from paint and dust at home and the most critical step towards eliminating this source is stronger enforcement of the City’s existing laws. The City Council’s legislative package on lead poisoning is a positive step towards making New York a lead-free city, and we are looking forward to working with members on stepped-up enforcement.”