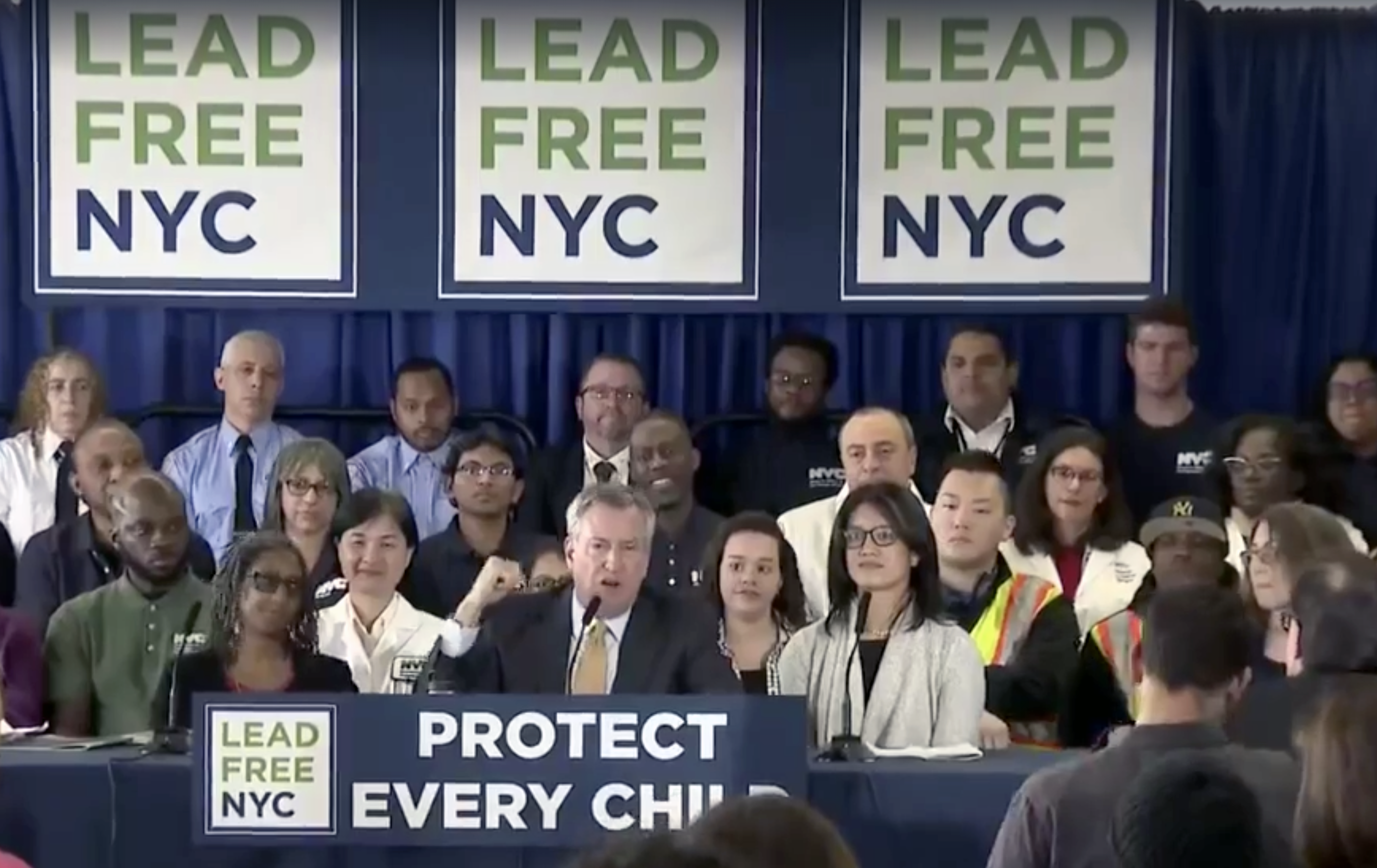 NYLPI’s report showed that despite one of the strongest lead laws in the country, there’s been no enforcement against rogue landlords since the law was put into place. The mayor’s “Lead-Free NYC” plan, released this morning, aims to change that.

You can watch full video of the press conference, courtesy of CBS New York, on NYLPI’s Facebook page. The mayor introduces NYLPI at the 28-minute mark:

“I want you to hear from Rachel Spector who’s the Director of Environmental Justice at New York Lawyers for the Public Interest,” Mayor de Blasio said. “They’ve used the power of the law and advocacy efforts to fight to make sure that homes are safe, and that environments are sustainable, and they’ve represented tenants, working to make sure that they were kept free of lead paint and lead dust. Also, Rachel and her team provided tremendous help in the creation of this report, and this plan.”

Rachel spoke at the press conference:

“Thank you to the Mayor, the deputy mayor, Commissioner Garcia, and others here for your focus on the preventable tragedy of childhood lead poisoning.  AS others have said, we have one of the strongest lead poisoning laws in the country, but unfortunately, we at NYLPI and other advocates see that there’s a handful of landlords who neglect their duties under the law, or exploit loopholes, and in doing so, they’re putting tenants at risk. NYLPI recently represented tenants in a building where the landlord’s reckless demolition filled common areas with dust containing lead at 40 times the legal limit. The dust seeped under tenants’ doors into their homes. These tenants were organized – they called DOHMH to test for lead. When DOHMH came and found these high levels, they refused to share the results with the tenants. That was their practice. They told tenants to file a FOIL request for the lead results. Meanwhile, the landlord cleaned up for a day, then went back to the same dangerous practices, filling halls with lead dust again and again. A family with three young children had to walk up five flights of lead dust-covered stairs each day. By the time we went to court to stop this, it was far too late to prevent the lead exposure that had occurred. And this landlord was creating the same lead hazards in three other buildings he owned.”

“We must stop landlords from flouting the safe construction laws in the first place.”

“Only when landlords know that the city is watching, and they might get caught endangering tenants and face real consequences for their actions, will we reach our goal of ending childhood lead poisoning. That is why we must target landlords that fail to inspect and abate lead paint hazards, and hold them accountable. That is why agencies must work together to proactively inspect construction in occupied buildings and shut it down when it is not being done safely. We look forward to seeing targeted proactive enforcement by the city, as well as a focus on preventing lead exposure from ALL sources, to move us toward our goal of a lead free NYC.”

The press conference was covered on CBS, and by the Daily News.

The mayor’s office also quoted NYLPI in their press release on the issue.