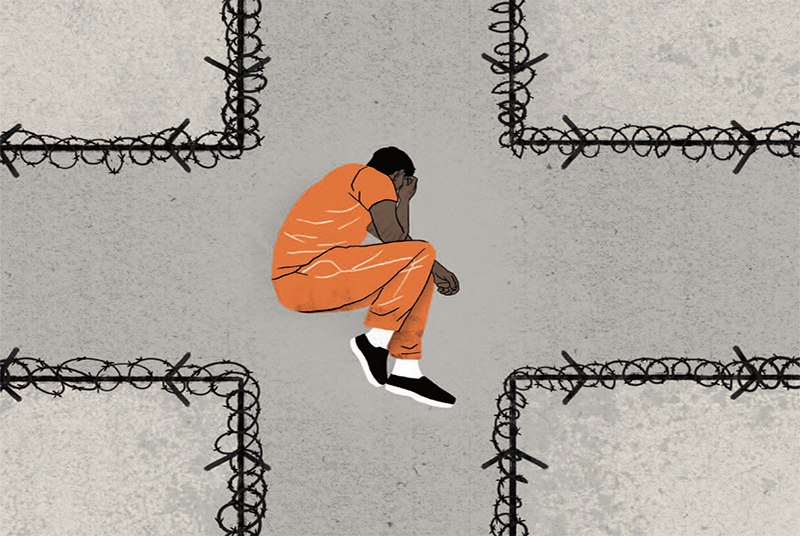 WebMD’s Medscape featured the open letter to Immigration and Customs Enforcement, written by NYLPI’s Medical Provider’s Network and Doctors for Camp Closure, advocating for the release of people from immigration detention to stop the spread of COVID-19. Over 4,200 physicians have signed the letter.

The Medscape article can be read below.

Docs’ Group Confronts ICE Over ‘Dangers of Detention’ From COVID-19

In mid-May, 30 members of Doctors for Camp Closure and other immigrant rights groups camped outside the Elizabeth Detention Center in New Jersey for 24 hours, hoping their plea would be heard: Release the immigrants to help stop the spread of COVID-19 among the facilities’ occupants.

They unfurled a purple banner with bright yellow lettering: “Free Them All.” During the vigil, some laid down in the street outside the center for a ”die-in.” Lying motionless, they tried to convey their fears about the effects of a pandemic among detained immigrants.

Over the course of a week, vigils also took place outside immigrant detention centers in California, Colorado, Maryland, Massachusetts, Michigan, and Oregon, says Marie DeLuca, MD, an emergency medicine research fellow and organizer of Doctors for Camp Closure, a nonpartisan advocacy group of more than 2200 physicians and other healthcare professionals.

“Overall, I think the actions were successful in our goal of bringing attention to the dangers of detention,” DeLuca says.

As of May 26, at least two people had died of COVID-19 while in custody of US Immigration and Custom Enforcement (ICE), according to the American Immigration Lawyers Association. At least three guards who worked at ICE facilities have also reportedly died from COVID-19.

According to ICE, 25,911 people were in custody as of May 23, and 2620 have been tested for COVID-19. Of those, 1327 detainees tested positive for COVID-19, as have 44 ICE employees working in the detention facilities. According to the ICE website, to date, almost 700 people have been released because of a court order.

Asked to respond to the vigils, ICE spokesperson Emilio Dabul referred Medscape Medical News to its coronavirus information page. It includes information on what ICE is doing to protect detainees and employees, as well as other information.

Calls to release detained immigrants in order to stop the spread of COVID-19 are being heard not only from advocacy groups but also from politicians and thousands of physicians.

An open letter that was sent to ICE in March by Doctors for Camp Closure and the New York Lawyers for the Public Interest had been signed by more than 4200 physicians.

In late April, Senator Dianne Feinstein (D-CA) called on ICE to ”explore the supervised release of vulnerable detained immigrants who are not risks to national security or public safety.” Methods of release, she says, could include parole or community- or case-based monitoring.

After the first reported COVID-19 death of an immigrant in custody at the Otay Mesa Detention Center in San Diego, California, on May 6, Feinstein called on Senate Judiciary Committee Chairman Lindsey Graham to hold a committee hearing on safety at ICE detention facilities. Carlos Escobar-Mejia, 57, died in custody while being treated for COVID-19.

Allen Keller, MD, director of the New York University Center for Health and Human Rights, tells Medscape Medical News that more deaths will occur unless policies change. “Detention facilities are a horrifically ideal environ for the spread of COVID-19.”

Writing in the Lancet , Keller claims that immigrant detention facilities pose a danger ”not only to the vulnerable populations detained within their walls but to the nation’s public health.”

He notes that ICE detention facilities are often in small, isolated towns and employ local residents who move back and forth daily between facility and community. As COVID-19 spreads, ”the local health-care systems will be overwhelmed,” he writes.

The cramped quarters in the detention centers, experts such as DeLuca say, make social distancing impossible and are conducive to spreading the coronavirus. Public health would be protected by releasing detainees who don’t pose a risk. Many have families in the United States with whom they could stay, and advocates say community groups could step in to find facilities for a 14-day quarantine after release.

After the Elizabeth Detention Center vigil, a class action lawsuit was filed on behalf of four residents there seeking release. Soon after, one was deported. His attorneys say a judge granted a stay of deportation; ICE, according to its spokesperson Dabul, disagrees.

On May 20, at a press conference conducted by the Immigrant Defense Project, the American Friends Service Committee, and Immigrant Rights Clinic of Washington Square Legal Services, Jean Denis Fosting, who was a resident at the 300-bed Elizabeth Detention Center from November 2019 to March 2020, talked about his stay there.

“I saw the sky only once,” he said. ”There were several protests over meal quality. The officers told us they were not responsible for the quality of our meals.” Fosting says he heard people crying themselves to sleep. “They were losing their minds.”

Quarters were cramped, he said. There was no separation between toilets and beds, and the odors were strong.

On its website, ICE says it is ”taking important steps to further safeguard those in our care” and that “ICE epidemiologists have been tracking the outbreak, regularly updating infection prevention and control protocols, and issuing guidance to ICE Health Service Corps (IHSC) staff for the screening and management of potential exposure among detainees.”

In response to the pandemic, ICE has temporarily suspended social visitation at the detention centers and states it is instructing wardens and facility administration to maximize use of video visitation by Skype, FaceTime, email, or other avenues.

Hector Garcia Mendoza, 30, and three others agreed to be plaintiffs in the class-action lawsuit demanding release of all immigrants at the Elizabeth Detection Center.

Garcia Mendoza, who has asthma, reported experiencing chest pain and shortness of breath, according to his attorneys from the American Friends Service Committee, the Immigrant Defense Project, and the NYU Immigrant Rights Clinic. These attorneys filed a petition seeking a stay of deportation on May 19, which they say was granted that evening.

However, ICE deported Garcia Mendoza. According to Dabul, Hector Garcia Mendoza, a Mexican national in the United States illegally, was arrested March 13 on immigration violations and was taken to the Elizabeth Detention Center. “An immigration judge ordered his removal from the US May 4, and ICE removed him to Mexico May 19. Garcia Mendoza waived his right to appeal the judge’s decision.”

As of May 26, his whereabouts were unknown, according to Rachel Cohen of the Immigrant Defense Project.

On May 18, Colorado Doctors for Camp Closure members offered enough masks to supply all 510 detainees at the GEO Aurora ICE detention facility, but ICE refused the offer, says Danielle Loeb, MD, MPH, a member of the organization and an associate professor of medicine at the University of Colorado. “They kept saying it was against ICE policy to accept PPE [personal protective equipment],” Loeb said.

On its website, updated May 22, ICE says it will continue providing appropriate PPE to those in custody, but ”is not accepting donated PPE, but will continue to evaluate its need to do so in the future.”

Loeb says they have now offered the masks to officials at the Denver jail, and officials there have been more receptive to the offer. “We are hopeful they will give the masks to these people right when they come in,” she said.

Keller has received consultancy fees from the US Citizenship and Immigration Services, which is an agency of the US Department of Homeland Security separate from ICE.