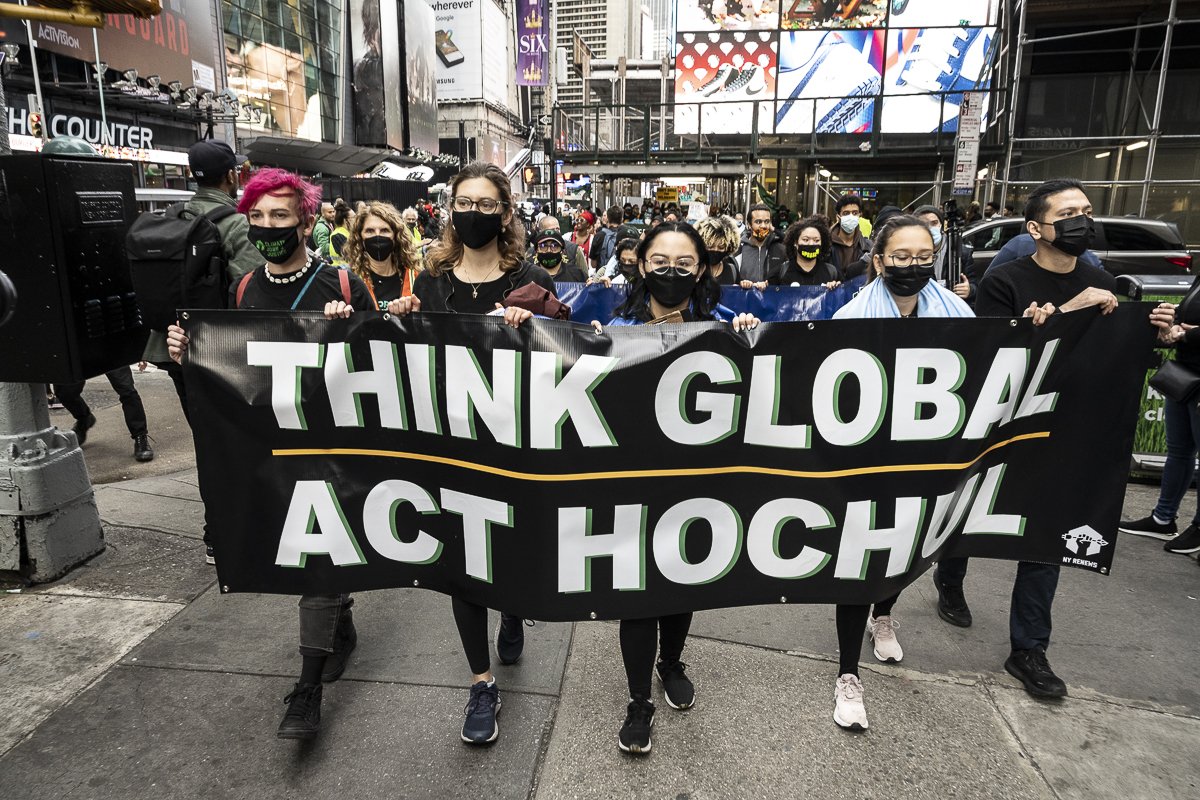 The NY Renews coalition and allies are calling on newly-elected Governor Kathy Hochul to include at least $10 billion in climate funding in the 2023-2024 NYS budget.


New York State — Election day votes are in and the call is clear: New Yorkers across party lines voted in favor of climate funding by voting for the Clean Water, Clean Air, and Green Jobs Environmental Bond Act, which gives the state the green light to borrow $4.2 billion, including investments in conservation and climate-crisis adaptation measures. Statewide, a resounding 60% of voters approved the proposal, with an impressive 81% yes vote in New York City.

The Bond Act is a good start—but it’s not enough. It’s been three years since New York passed our landmark climate law, the Climate Leadership and Community Protection Act (CLCPA), and we’re far from achieving the law’s mandate of largely decarbonizing the state economy by 2040. The state’s own analysis shows that we’ll need to invest roughly $15 billion a year by 2030, and $45 billion a year by 2050.


While the Bond Act will give us a boost toward meeting these mandates, a massive funding gap remains. Newly-elected Governor Kathy Hochul has a responsibility to act boldly and surely on climate in her 2023-2024 budget. We’re calling on her to include at least $10 billion for climate justice and to pass the measures within the Climate, Jobs & Justice Package—our roadmap to swiftly and equitably transition New York State from a fossil fuel economy to a regenerative one.

“The passage of the Environmental Bond Act further substantiates what we’ve known for decades: There is immense popular support in New York for investing in green jobs and clean air. Grassroots pressure for climate action is working and New Yorkers are eager to move us to a renewable energy economy. We are excited to see the funding go to key programs that will create healthier communities and green jobs, and we urge Governor Hochul to use this momentum to invest even more in New York’s landmark climate law,”  said Maritza Silva-Farrell, Executive Director of ALIGN NY and Steering Committee member of NY Renews.

“Over 3.3 million New Yorkers voted yes for the Environmental Bond Act. With nearly 60% of the vote, this represents a clear consensus in our state for climate action. However, the State Legislature and Governor must go even further during the 2023 legislative session. We encourage them to pass New York Renews’ entire Climate, Jobs & Justice package which includes transformative bills such as the Build Public Renewables Act and the Fossil Fuel Subsidy Elimination Act. Only then can we truly guarantee clean water, clean air, and green jobs for all,” said Daniel Atonna, Political Coordinator at For the Many.

“Under Governor Cuomo, the Environmental Bond Act stood at $3B; pressure from advocates meant that Hochul bumped that figure up to $4.2B. Without ongoing pressure from climate and environmental justice groups across the state, including our coalition’s push for the Climate and Community Investment Act (CCIA), the Bond Act wouldn’t have been on the ballot, nor would it have been as high,” said  Katherine Nadeau, Deputy Director of Catskill Mountainkeeper. “However, $4.2 billion over the course of decades is far from enough. The state’s own analysis showed that $15 billion is the minimum we’ll need to launch the transition to a renewable-energy economy—and Governor Hochul has the chance to allocate those funds via her 2023-2024 Executive Budget.”

“With the passage of this measure, voters across New York—Democrats, Republicans, Independents, and people from various walks of life—overwhelmingly support funding for climate justice and green jobs. Make no mistake, this was a mandate for the people and by the people. However, we know the real work begins with ensuring that the implementation of this initiative complies with our state’s landmark climate law by allocating at least 40% of the Environmental Bond Act’s investments to disadvantaged communities (DACs) that bear the greatest risks and harms from pollution and an intensifying climate crisis. New York Lawyers for the Public Interest implores the Climate Action Council to see to the people’s work by expediting the final criteria for identifying DACs statewide. Moreover, Governor Hochul and pertinent state agencies must not allow one dime of these funds to usher the proliferation of false climate solutions such as carbon capture and sequestration and hydrogen combustion. The people of New York have spoken emphatically and they expect their lawmakers to heed their collective call,” said Anthony Rogers-Wright, Director of Environmental Justice at New York Lawyers for the Public Interest.

“We applaud the voters of the state for seeing the writing on the wall in passing the Environmental Bond Act—the climate crisis is worsening, our natural environment is being degraded, and frontline communities are suffering from the disproportionate negative impacts of an extractive and exploitative economic system. Governor Hochul and elected leaders in the NYS Legislature now have a clear political mandate from the people of NY to build on this important victory by fully funding the implementation of the Climate Leadership and Community Protection Act and accelerating investments to disadvantaged communities, like our own here in Buffalo, for community-led climate solutions like weatherization, 100% renewable affordable housing development, community solar, and training for family-sustaining green jobs,” said Clarke Gocker, Director of Policy and Strategy at PUSH Buffalo.

“The resounding support for the Environmental Bond Act shows that investing in climate, jobs, and justice is a winning strategy.  Now is the time for New York State to double down on its commitments and get this funding out to communities on the frontlines of environmental racism,” said Monique Fitzgerald, Climate Justice Organizer with the Long Island Progressive Coalition.

“With less than one-third of the money going to climate mitigation and adaptation, the Environmental Bond Act is primarily a conservation bond rather than a climate justice one. The bulk of the bond will fund projects that protect clean drinking water, update water and sewer systems, and conserve natural resources.  We now need to secure dedicated funding to fully implement New York’s Climate Act for a just transition away from an economy based on fossil energy,” said Michael Richardson, cofounder and organizer of Rivers & Mountains GreenFaith.