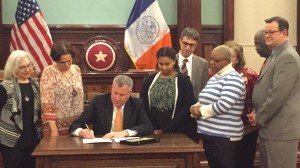 The poster child for this bill was PS 51 in the Bronx, a school sited in a former lamp factory.  The City did no air testing when they first occupied the building.  Over a decade later, in 2011, the City finally tested the air when the DOE’s lease was up for renewal and found the presence of toxins well in excess of State health standards.  Yet the DOE kept kids and staff in the school for another 6 months, never alerting them to the test results.

The new law will require DOE to notify parents within 7 days of any test results they receive that exceed health standards and will also require the DOE to post all test results on its website.  Problems like PS 51 will never happen again, and parents will have direct access to information on the environmental safety of their kids’ schools.

“NYLPI has been working for many years with parents, particularly in low-income neighborhoods and communities of color, to advocate for environmentally safe schools and increased transparency. Intro 126 will ensure that parents and community members have easy access to vital information they need to protect their children’s health,” said Mark Ladov, staff attorney at New York Lawyers for the Public Interest. “We commend the City Council—in particular Speaker Melissa Mark-Viverito, Councilmember Fernando Cabrera and Education Committee Chair Daniel Dromm—for protecting New Yorkers’ right to know about the environmental health of our schools.”

A copy of the legislation can be found by Clicking Here

A City Council press release on the new legislation can be found at: http://council.nyc.gov/html/pr/012215stated.shtml