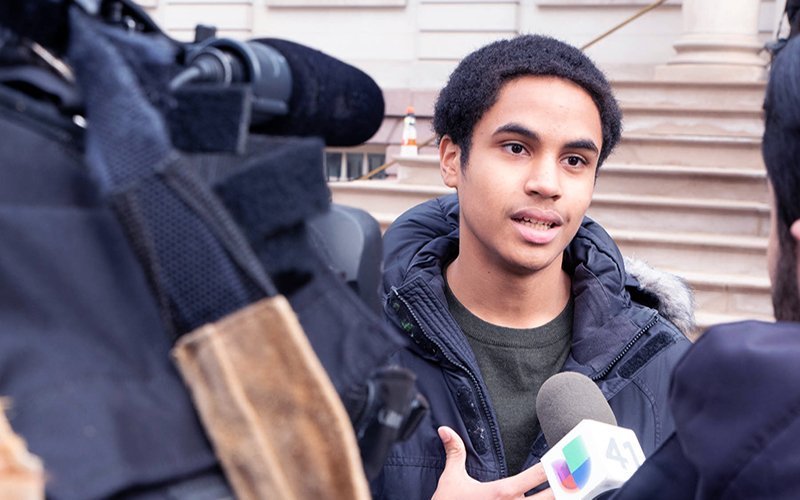 Matt Diaz, a student at the Bronx Academy of Letters and a lead plaintiff in the lawsuit filed by NYLPI on June 21, 2018, pressed Mayor Bill De Blasio live on the airwaves about whether he has a plan to fix the fact that Black and Latino students are less likely to have access to public high school sports teams.

Mayor de Blasio responded that he was “not satisfied” with the current situation, but the mayor said he couldn’t talk in more depth because of pending litigation filed by NYLPI, when Diaz pushed him, asking, “do you have a plan?”

Matt’s questioning even drew praise and an invitation to learn more about journalism from Jillian Jorgensen, the City Hall bureau chief at the NY Daily News:

Matt’s got a future in Room 9. If you’re out there, Matt from the Bronx Academy of Letters, and ever wanna tag along to a press conference, get in touch. 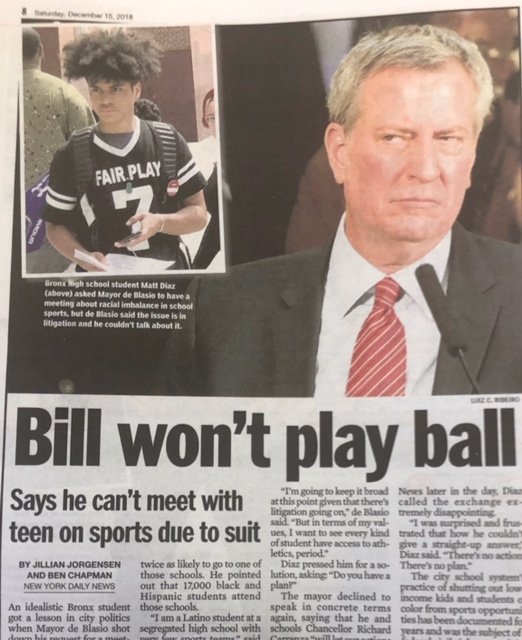 Speaking to the Daily News later in the day, Diaz called the exchange extremely disappointing.

“I was surprised and frustrated that how he couldn’t give a straight-up answer,” Diaz said. “There’s no action. There’s no plan.”

Diaz, the youth lead in the Fair Play coalition, was not done. He then asked the mayor if he would be willing to meet to discuss the issue further, and in response, the mayor did concede to having Diaz and his fellow high school students come in to meet with “senior people at the Department of Education” and said, “we’ll be showing you that we’re hearing your voice.”

You can listen to the Brian Lehrer show here; the issue comes up at the 13:30 mark. New Yorkers wishing to email their council member about fairness and transparency in granting and denying interscholastic sports teams  can do so here.

The mayor responded: “Well Matt, thank you very much for the question and I want to commend you, because a high school student that can get on the radio live with hundreds of thousands of people and present his case so eloquently, that says a lot of good about you and about your school. I agree with the chancellor, I am not satisfied with the status quo at all, we are gonna move forward cos I wanna make sure that students from every zip code, every kind of student has access to athletics. We’re gonna figure out ways to move forward. I will only say Brian, there is a lawsuit, as you know, so I’m gonna keep it broad at this point, given that there’s litigation going on. But in terms of my values, I want to see every kind of student have access to athletics, period.”

Lehrer asked, “And you can’t get any more specific than that?”

Matt asked him: “Do you have a plan?”

“Well, Matt, I think I’m, the chancellor and I both are being very about our values and our vision, but again, you’ll understand, when there’s litigation, when there’s a lawsuit going on, it’s not the time for me to go into a lot of detail, we’ll let our actions speak for themselves, and more to come soon.”

“My sport is volleyball. We applied for volleyball and we got denied. That’s why I started this work. We’ve never had the chance to play the sports that we wanted. And that’s probably why I’m here today, because we’re always fighting and ask questions, and we never get the answers to these questions like when is anything going to happen for sports?”

“Thank you for making the case powerfully and for standing up for your fellow students,” said the mayor. “I just want to say as a matter of democracy, we have mayoral control of education, that means when you’re talking to me, you’re talking to the ultimate decisionmaker about our public schools, and you’re talking directly to me. And everyone’s hearing the conversation. And this is an example of what democracy should be like, in my view, in that here you are, bringing forward a case, very powerfully, I not only hear you, I see your point strongly, I want to do something about it, so I just want you to know, don’t worry, don’t feel that your voice isn’t being heard. It is, and we’re going to have more to say on it quite soon.”

Diaz asked if he could meet with the mayor, who said he’d “make sure” the chancellor and the relevant folks at the Department of Education meets with him. “Again, we’ve got a lawsuit going on, so there’s certain things we can and cannot say,”but I definitely want you and fellow students to come in and meet with top people at the DOE, and we’ll be showing you that we’re hearing your voice.”

Again, you can listen to the Brian Lehrer show here, and the issue comes up at the 13:30 mark.