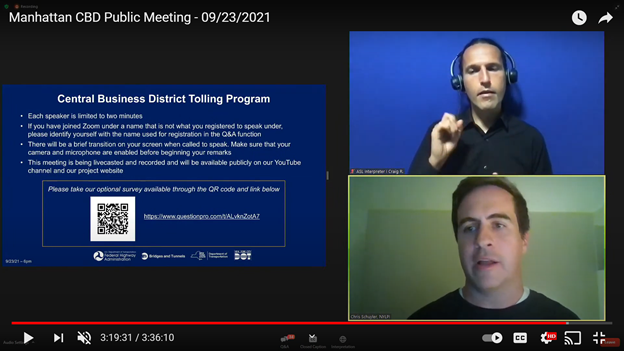 The campaign for Congestion Pricing in New York was in full force this past week as Senior Staff Attorney Christopher Schuyler presented comments to the MTA during their first of ten virtual public meetings on the congestion pricing program. Christopher examined through his comments the ways in which congestion pricing would support both disability and environmental justice:

“The [Capital Plan]’s proposal to make 70 stations accessible, and make improvements to 175 other stations, in accordance with the Americans with Disabilities Act, is long overdue. The portion of the Plan’s funding raised by congestion pricing which will go to accessibility improvements must be at least proportional to the percentage of the Plan which deals with accessibility, and critically, must be earmarked for spending solely for the proposed accessibility work.

We also strongly support congestion pricing for the benefits of reduced climate emissions and traffic congestion. Congestion pricing will counteract traffic gridlock, which slows many buses and paratransit vehicles to a mere crawl. Easing traffic in the central business district will help people, including those with disabilities, get to jobs, schools, healthcare, and other appointments faster and more reliably.”

Learn more about the MTA public meetings and how to submit comments here.

“Congestion pricing is a fundamental issue of disability justice and equity for the hundreds of thousands of New Yorkers who identify as having disabilities, and the millions of us who someday will experience a form of disability and have difficulty using our hugely inaccessible — basically functionally inaccessible — subway stations.”