Speakers included numerous “peers” – those with lived mental health experience – as well as family members of peers, including, Kimberly Blair, (CCIT-NYC, NAMI-NYC), Evelyn Graham-Nyaasi (Community Access), Felix Guzman (CCIT-NYC, VOCAL NY), Peggy Herrera, (CCIT-NYC and Freedom Agenda), and Min, Dr. Victoria A. Phillips (Mental Health Project, Urban Justice Center). Speakers unanimously pointed to the trauma peers feel at the hands of police and the need to remove police from the equation entirely.  All called for substituting trained peers who “have been there” and who “get it” as first responders.

“City Council must vote yes to the proposed $112 million for an alternative mental health crisis response, and make sure the alternative system removes police entirely, dispatches trained peers (those with lived mental health experience), provides a call-in number other than 911, and responds as quickly as other emergency response systems. The time is NOW!” said Ruth Lowenkron, Director of the Disability Rights Program at New York Lawyers for the Public Interest and a member of the CCIT-NYC Steering Committee.

Min, Dr. Victoria A. Phillips, Mental Health Project, Urban Justice Center stated “At a time when calls across this nation for police reform are finally being heard, here in this great city of New York, we still struggle to get it right. Over 50% of those currently detained by the NYC Department of Correction have some form of mental health concern. Why aren’t they being diverted? Why are communities still being forced to dial 911 for a mental health crisis? 911 received over 200,000 calls requiring a mental health response. When will this city hear its constituents’ cries for help rather than continue to harm them?”

“If we do not focus on developing the alternative response systems and services that those of us with professional and lived expertise know to be more effective and humane, we will continue to see unnecessary deaths,” said Evelyn Graham-Nyassi of Community Access. “Coercive tactics breed fear and mistrust, especially when applied to those in need of services and compassion, not policing.”

“I’m here to not let trauma speak for me, and to allow recovery to be spotlighted. When someone is in crisis, compassion is required and a peer-led response would be the best option,” said Felix Guzman, poet and organizer with VOCAL-NY and a member of the CCIT-NYC Steering Committee.

“We would like to see a correct non-police response to mental health crisis calls implemented city-wide. That means one that centers peers with lived experience and amplifies peer voices,” said Kimberly  Blair, Manager of Public Policy and Advocacy at NAMI-NYC and a member of the CCIT-NYC Steering Committee.

“We need a mental health system that will treat individuals before their actions and behaviors provoke a police response,” said Peggy Herrera, mother, mental health advocate, Leader of the Freedom Agenda, and a member of the CCIT-NYC Steering Committee. “We need a supportive and safe response; we cannot continue to rely on emergency rooms or jails as mental health centers.”

Mayor Bill de Blasio’s most recent executive budget allocates $112 million to fund a new, city-wide Mental Health Crisis Response system. While this is a step in the right direction, there are many aspects of the Mayor’s proposal that need to be rectified if the system is to be truly transformational. The city must invest in a crisis response system that: 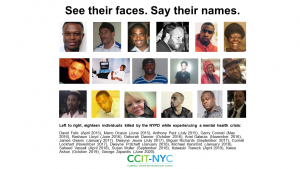