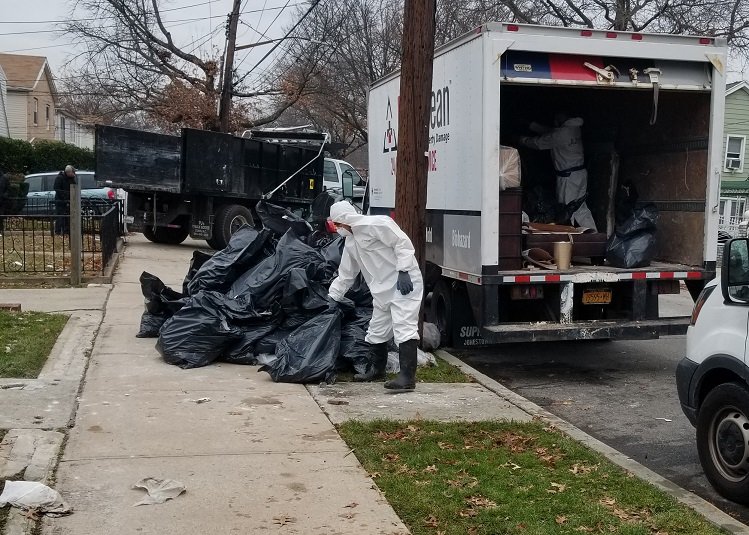 Families in South Ozone Park, Queens rallied Saturday to protest the City’s response to damage caused to their homes last Thanksgiving when a pipe-collapse caused raw sewage to back up into the homes of hundreds of residents. With homes damaged and belongings ruined, many stunned families, including those who had to decamp to hotels while navigating time-sensitive governmental claims processes, report ongoing confusion and conflicting guidance from the New York City Comptroller’s Office – the government entity charged with administering their claims and compensating them for their losses.

New York, NY – November 28, 2020— Raising their voices and toting buckets to signal their ongoing attempts to recover, community members in South Ozone Park, Queens rallied today to mark the one-year anniversary of a disaster that flooded their houses with raw sewage. Governmental infrastructure failure caused the sewage backup, but many community members still struggle to navigate the City’s claims and compensation system as they try to rebuild their lives and homes.

With homes damaged and belongings ruined, many stunned families, including those who had to decamp to hotels while navigating time-sensitive governmental claims processes, report ongoing confusion and conflicting guidance from the New York City Comptroller’s Office – the government entity charged with administering their claims and fully compensating them for their losses.

Rishad Mubarak, who bought his house four days before the disaster, still awaits an offer of compensation. “I have three kids. All my credit cards are full.”

Olive Harrielal regrets accepting an offer compensating her for just a fraction of what she lost. “They gave us a raw deal.”

After the community reached out for assistance, New York Lawyers for the Public Interest (NYLPI) quickly launched the South Ozone Park Sewage Legal Assistance Project to help families navigate a confusing process with the City. An array of major law firms – including Beveridge & Diamond, Jenner & Block, Kelley Drye, Stroock & Stroock & Lavan and Vinson & Elkins – have stepped up to assist on a pro bono basis, representing many families to help them pursue their claims with the Comptroller’s office.

“The extraordinary pro bono commitment from leading law firms that responded to our outreach and partnered to create the South Ozone Park Sewage Legal Assistance Project has been pivotal in pursuing justice,” said NYLPI Legal Director Hayley Gorenberg. “The lawyers and advocates involved will not stop fighting to help people harmed recover and rebuild after such extensive damage throughout the community.”

Individuals and families have continued to face new hurdles to recovery throughout this process, both because of the length of time the problem has persisted and as a result of the COVID-19 pandemic. Meanwhile, some of the residents are experiencing newer problems as their homes are affected by mold.

Aracelia Cook, vice president of the 149th Street South Ozone Park Civic Association, added, “The stories hurt my heart, and the City doesn’t know what people are going through. We can’t give up the fight.”

About New York Lawyers for the Public Interest (NYLPI)
Founded more than 40 years ago by leaders of the bar, New York Lawyers for the Public Interest is a community-driven civil rights organization that pursues equality and justice for all New Yorkers. NYLPI works toward a New York where all people can thrive in their communities, with quality healthcare and housing, safe jobs, good schools, and healthy neighborhoods. NYLPI’s community-driven approach powers its commitments to civil rights and to disability, health, immigrant, and environmental justice – including a campaign for healthy homes. The South Ozone Park Sewage Legal Assistance Project is a collaboration of NYLPI and key pro bono partners. For more information, please visit www.nylpi.org.

Gothamist: One Year After Queens Sewage Flood, Some Residents Are Still Seeking Compensation