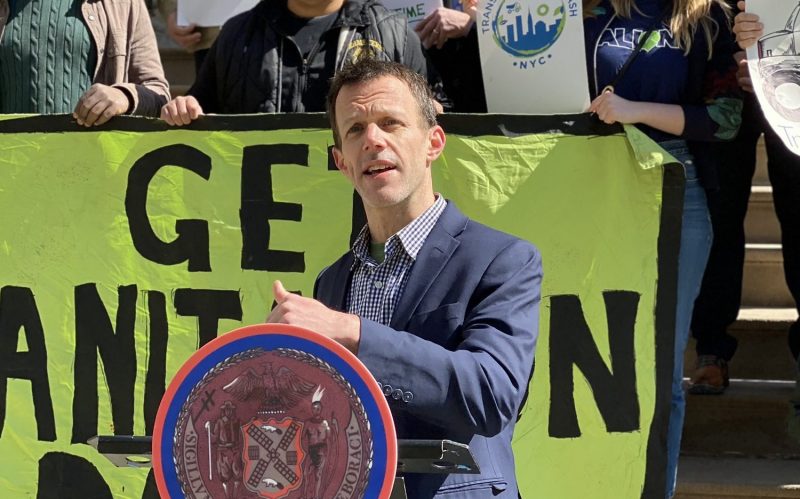 New York, NY – Sanitation workers, environmental justice and climate leaders, safe streets advocates and elected officials rallied on the steps of City Hall to demand the immediate implementation of Local Law 199 of 2019, which has been delayed for more than two years.

The landmark Commercial Waste Zones Law, which was supported by the Transform Don’t Trash NYC coalition, will make private sanitation safer and far more efficient by eliminating up to 18 million unnecessary truck miles per year from our streets. The law also enables the City to negotiate higher standards for recycling and composting, cleaner and more equitably sited transfer stations, worker safety, and job creation in the local waste industry by negotiating comprehensive ten-year contracts with the waste companies selected to serve each zone.

Under the City’s current private waste system, dozens of carting companies compete for business in each neighborhood, contributing to mistreatment of workers, dangerous conditions for drivers and pedestrians alike, low recycling rates and a system that dumps a disproportionate amount of garbage and air pollution on a few environmental justice communities.

“Three years ago, New York City passed the historic Commercial Waste Zones Law aimed at implementing a safer, healthier, and more efficient commercial waste collection system throughout the five boroughs—and it’s long overdue for implementation” said Council Member Sandy Nurse, Chair of the Committee on Sanitation.  “The way commercial waste is collected, processed, and packaged for export has a major impact on our City overall, but its impacts are most acute in the neighborhoods of North Brooklyn, Southeast Queens, and the South Bronx. Our communities cannot afford any more delays. We must commit to accelerating the work of achieving our environmental justice, waste equity, climate, and Zero Waste goals.”

“I authored and passed the Commercial Waste Zones legislation in my past role as Chair of the City Council’s Sanitation Committee to bring comprehensive reform to the private carting industry, reduce greenhouse gas emissions, improve our city’s diversion rates for recycling and organics, make our streets safer, and improve conditions for workers in the industry. Supporting CWZ just makes sense,” said Brooklyn Borough President Antonio Reynoso. “I thank my partners for continuing the advocacy to ensure this important program is fully implemented as quickly as possible.”

“It is an environmental and worker justice imperative that the City implement the Commercial Waste Zones law,” said Council Member Lincoln Restler. The private carting industry crisscrosses our communities every night, creating unnecessary pollution and traffic; its workers unprotected and underpaid. The City Council did its part to address these issues when it passed Local Law 199, now we need the City to do its part and make this law a reality.”

“With each day that the implementation of Commercial Waste Zones is delayed, the acute threats faced by workers and communities suffering from poor air quality and noise pollution increases. This important legislation makes critical strides in regulating an industry that has long operated under cover of night, both literally and metaphorically,” said Council Member Jennifer Gutiérrez. “I am calling on Mayor Adams to protect workers in the commercial waste hauling industry, as well as the impacted Environmental Justice communities, who disproportionately suffer from respiratory and heart diseases due to dangerous practices like this unregulated trucking.”

“Commercial sanitation workers have waited too long for these reforms and we need commercial waste zones now,” said Daniel L. Wright, President of Teamsters Local 813. “We are essential workers who put our health and safety on the line to stay on the job and get New York City through the pandemic. We need Mayor Adams and the Department of Sanitation to implement this law to raise safety standards and hold private sanitation companies accountable for environmental and worker abuse.”

“Our city needs to deploy every available tool as we continue to lose ground on climate emissions,  zero waste, and safe streets goals,” said Justin Wood of  New York Lawyers for the Public Interest.  “Local Law 199 is a common-sense, triple win for workers, for climate, and for environmental justice communities.  Mayor Adams and DSNY need to move forward with implementation, take a strong stance in upcoming negotiations with the private waste industry, and ensure the new system includes major investments in waste reduction, cleaner and safer trucks, and good green jobs.”

“Local Law 199 marks a transformation of our commercial waste sector, from a race-to-the bottom industry to one with strong labor, environmental, and safety standards that are part of the vision for the future of New York City. Mayor Adams and the Department of Sanitation must ensure that we move swiftly to implement this law, meeting the twin goals of worker and environmental justice with a new system for commercial waste collection,” said Maritza Silva-Farrell, Executive Director of ALIGN, leader of the Transform Don’t Trash coalition.

“The Waste Equity Law and the Commercial Waste Zones Law were always intended to work in concert to finally bring some relief to Black and brown communities that have been dealing with transfer stations, diesel garbage trucks, and health crises for far too long,” said Eddie Bautista, Executive Director the New York City Environmental Justice Alliance.  The City should use the existing marine transfer stations and the upcoming transition to zoned waste collection to cut as many truck miles and as much air pollution as possible from overburdened communities.”

“If there is any silver lining to my story of being run over by a dump truck, being in a coma, having a full leg amputation, residual nerve damage and unending medical bills, it is that even if I cannot return to my former career as a nurse in a cancer center, I can use my voice and visible disability to prevent more harm,” said Families for Safe Streets member Lauren Pine. “For the New Yorkers like myself who have been injured, killed, or are routinely threatened by these trucks, commercial waste zone reform can not come fast enough. Passed in 2019, Local Law 199 will remove up to 18 million unnecessary truck miles each year, and must be implemented without delay.“

“The CWZ plan is a huge step for decreasing harmful emissions caused by unnecessary truck traffic. It could do twice the work by prioritizing and uplifting microhaulers, who keep waste management hyper-local, creating green jobs and further prioritizing the reduction of environmental harm in Black and Brown neighborhoods where waste transfer stations have left indelible marks,” said Co-Director Nora Tjossem of BK ROT.

“As a Bronx resident I envision a future where my borough can be known for more than its dirty imagery” said Dior St. Hillaire, Worker-Owner at GreenFeen OrganiX. “Thanks to the amount of waste facilities and poor waste handling practices we suffer from higher rates of asthma and an increased rodent population. While trucks are necessary to handle the volume of materials in this city, Microhaulers play a significant part in consolidating, processing, and educating the local community about sustainable waste practices. We desperately need to reduce how many trucks are coming into our neighborhoods especially after Covid hit The Bronx hard! We have a right to clean air, clean streets, clean water and a better quality of life. The CWZ plan needs to move forward immediately in order to protect the most vulnerable and future generations. We will not reach our climate justice goals any other way”

“Communities in South East Queens have had to fight and advocate for the right to vote, better policing, and better education outcomes.  And on top of that we have to DEMAND clean air and clean water after decades of truck traffic, pollution, and odors from waste transfer stations in our community.  No, not Mississippi, but NEW YORK CITY GODDAM!  The time for a more equitable system is right now,” said Oster Bryan, President of the Albans Civic Improvement Association.

“Mayor Adams and the City of New York must implement Local Law 199 to make commercial waste collection more efficient,” said Elizabeth Adams, Senior Director for Advocacy and Organizing at Transportation Alternatives. “This law has been delayed for more than two years, creating dangerous conditions on our streets by enabling up to 18 million unnecessary truck miles. Reducing the number of trucks on our streets is key to safe streets, cleaner air, and less pollution.”

“Enactment of the Commercial Waste Zone Law by the City Council in 2019 marked one of the most significant reforms in New York City waste policy in decades.  When fully implemented, this statute will slash air pollution emissions and diesel truck traffic, improve conditions for private sanitation workers, boost recycling and composting of business trash, and improve the quality of life in neighborhoods across this city.  We look forward to working with City Council Speaker Adrienne Adams, Sanitation Chair Sandy Nurse and Sanitation Commissioner Jessica Tisch and her staff to ensure the timely implementation of this historic law,” said Eric A. Goldstein, New York City Environment Director at the Natural Resources Defense Council.