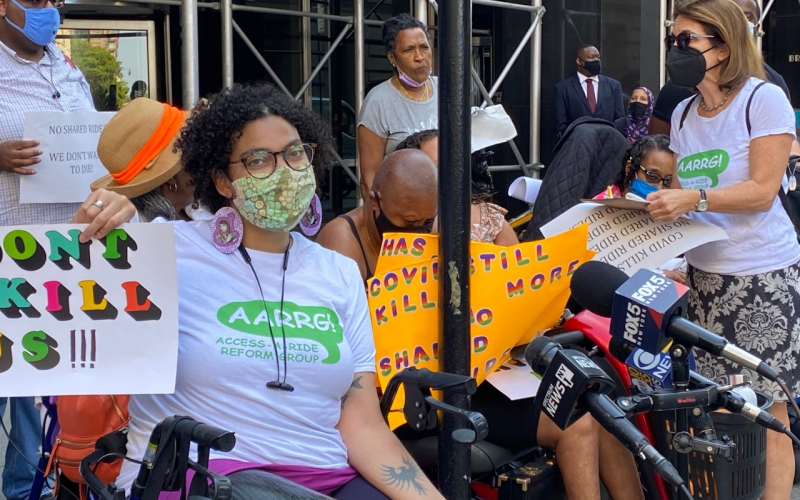 My name is Eman Rimawi-Doster and I work for NY Lawyers for the Public Interest. I’ve been the Access-A-Ride Coordinator and Organizer for 5 and a half years. And for those of you who don’t know what AAR is, it’s the paratransit service in NYC, which is run by the MTA.

I’m here virtually because Covid is on the rise and I have lupus, a very invisible but active disability. And because of a miscarriage 9 years ago, my lupus freaked out and caused me to lose both legs and my right knee. My husband recently went to a conference in CA and dozens of people got infected and one died. If we’re making things accessible, that means making sure a virtual option is available. There are disabled lawyers as well. I’m taking the LSAT next year and I’ll join that club, but I don’t honest don’t feel very welcome because of this.

Please make a virtual option available. It’s 2022. You’re all smart enough to do it, so do it. What are you doing as a public interest lawyer if you aren’t making sure everything is accessible to everyone who wants to participate? Disabled lawyers are lawyers too.

My lupus has been here since I was 15. I’m now 38. It has been a wild ride to say the least. I’ve gone through school, relationships, traveling, working, living this entire time with an autoimmune disorder that wants to kill me. If you don’t know what lupus is or don’t think it’s a big deal, I don’t blame you. When I was finally diagnosed at 17, I had no idea what it was either or that it would be so impactful to the trajectory of my life. It’s an autoimmune disorder. My body is fighting itself and the battle has been epic! Heart attacks, strokes, paralysis and amputation. And yet, I’m still very active in the community as an organizer and soon, a lawyer.

If you think unemployment is generally bad, it’s even worse in the disability community. The most recent report of the Bureau of Labor Statistics states that only 19.1 percent of persons with disabilities were employed.

And by the way, I received zero help to keep my Medicaid – the lifeline for people with severe disabilities – when I found work.  We need to help people with disabilities retain Medicaid when they start working.

Historically, I have never had an issue getting in the door for a job. But once I got hired, and they could see my lupus flare-ups, employers would change their tune and suddenly say and do things that would be deemed discriminatory.  I wasn’t believed by one employer when I was having mini-strokes and nearly died. I wasn’t accommodated while working at a different organization when I asked to work from home once a week, which led to me pushing myself to come into the office and finally quitting because it wasn’t worth the physical pain it was causing me. And one of the last organizations I worked at, a few years before I began at NYLPI, wouldn’t allow me to go part time, and literally told me, “push through your pain and exhaustion because we need you here full time.” I ultimately quit that job too, which is often what people with disabilities in my situation are forced to do. I’m educated. I have an extensive amount of organizing and facilitation experience. I’ve worked for a number of nonprofits and agencies throughout the city since 2000. I’ve been around the world and I’ve made all kinds of contacts with whom I still talk and with whom I continue to work. And while doing all of that, I had, and still have, Lupus.

But having Lupus for 24 years, and being an amputee for the last nine years, has shown me just how strong ableism is. I’ve been treated like my accessibility asks are too much, when they’re always reasonable and adhere to Americans with Disabilities Act (and city and state non- discrimination law) requirements. I’ve been made to feel bad or wrong when I’ve addressed discrimination which I knew was there.  Employers must be aware of the requirements of disability laws and they must provide people with disabilities with the necessary supports and accommodations to perform their jobs.

I’ve been making it work for five and a half years at NYLPI. NYLPI has seen the dedication I have put into my work every day. Not only does my work get results, but it gets  NYLPI media coverage on a regular basis, so that we can educate broadly about how crucial disability rights are.

Now, I didn’t get to this position easily, as I said. It took years of pushing and trying. And it wasn’t because I wasn’t qualified. It was because of my lupus. If law firms, businesses and nonprofits gave others with invisible disabilities a chance like NYLPI gave me a chance, they’d see how much we’re capable of and how much money we can bring in. Since I’ve joined NYLPI and was featured in the promotional video about our paratransit campaign, our budget has increased by several hundred thousands of dollars and it continues to grow.

Having someone with an invisible disability has also given the community ease because they know that I know exactly what they’ve been going through in terms of being believed and helped. I’ve been where they’ve been and they appreciate that lived-experience. That has caused people to ask me to join even more coalitions and campaigns around accessibility that aren’t about transportation, which is great.

Not only should we be holding governments, agencies, departments accountable but we should also hold ourselves accountable. Truly ask yourself why you don’t have anyone with an invisible disability working with you or for you. Ask yourself why they haven’t felt comfortable enough to talk to you about it. Ask yourself if your diversity work is real or simply performative. Because being an ally isn’t always supposed to be fun. It’s work. And you, and soon me, can’t truly say we’re interested in public interest if we’re excluding a massive part of our city. Coupled w/that, we need to think about diversity in a multifaceted way. While I’m an amputee with lupus, I’m also Black, Palestinian and a woman. I checked all kinds of diversity boxes but I never want to be used as a token. I’m a valuable addition to anyone’s team.