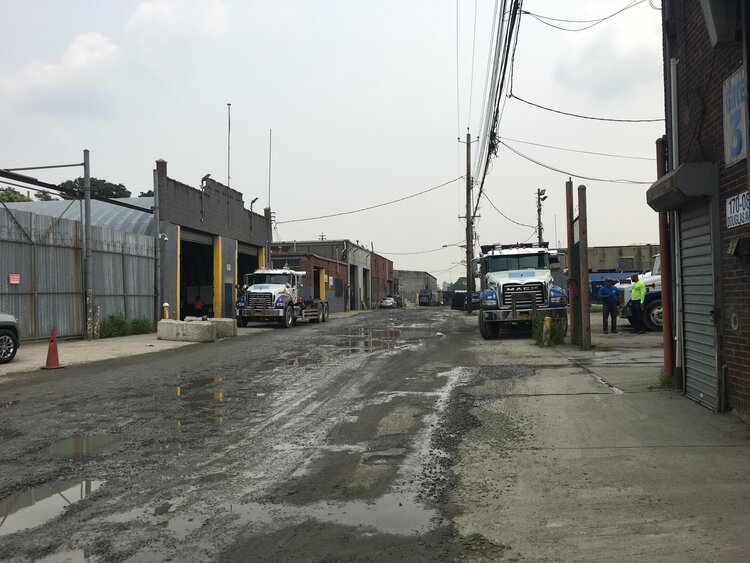 Proposed Int. No. 2349-A would amend the Waste Equity Law (Local Law 152 of 2018) to allow specific waste transfer stations to boost their permitted waste capacity — or the amount of garbage they can process each day — so long as they plan to export some or all of their waste by rail in four years’ time. In effect, the bill would allow two specific waste transfer stations in Southeast Queens Community District 12 — designated as overburdened by the Waste Equity Law — to increase the amount of garbage and trucks they bring into the community, slicing a big hole in the protections provided by the historic Waste Equity Law, and calling into question the fairness of the Council’s legislative process on matters of environmental justice.

Int. No. 2349-A would increase the environmental burden on the Southeast Queens community and undo the progress of the Council’s historic Waste Equity Law. New York City’s solid waste infrastructure has historically been concentrated in just three low-income and working-class communities of color, which have, for too long, borne the brunt of the resulting poor air quality, unsafe traffic, noise, odors, and vermin. After years of debate, comprehensive negotiations and compromise by all stakeholders, the City Council passed, and Mayor de Blasio signed, the historic Waste Equity legislation, which became Local Law 152 of 2018. Among other things, the Law reduced permitted processing capacity at waste transfer stations in these most overburdened neighborhoods – the South Bronx, North Brooklyn and Southeast Queens.

Now just a few years later, the Council is rushing to vote on Int. No. 2349-A, a bill that would undue much of the progress of the Waste Equity law for the residents of Southeast Queens. In short, the bill would provide a special exemption from the Waste Equity Law by allowing two of the worst-sited waste transfer facilities to increase their capacity if the transfer station operators promise to ultimately export a portion of their waste via a new rail link, which would presumably be built over the next four years.

Even if the waste-by-rail link contemplated in Intro 2349-A is constructed, there would be no meaningful reduction of trucks on the streets in Southeast Queens — in fact, truck trips and pollution there would likely increase. By increasing the capacity at these facilities, the legislation would have the effect of authorizing dozens more truck trips per day for the next four years. And even if, after four years, the facilities manage to export some or all of their waste by rail, there would be a permanent increase in waste being trucked into the facility, as well as four years of increased truck traffic hauling waste into and out of the facility, prior to the promised construction. The net result of this bill would be more trucks on the streets of Southeast Queens, and more air pollution.

To make matters worse, the facilities that stand to benefit from Intro 2349-A have failed to comply with city and state environmental and safety laws and rules, even at their current capacity. Both American and Regal Recycling have been issued violations by NYCDEP, FDNY and NYCDOT for truck idling, failure to conduct fire inspections, and failure to obtain a refuse container permit as recently as 2020. Additionally, the New York State Department of Environmental Conservation has fined Regal Recycling and placed the company under two consent orders for failing to minimize leachate (i.e., contaminated water run-off) and for improper handling of food waste as recently as 2019. These same Southeast Queens waste transfer facilities have just been notified that they are being sued by community members and environmental advocates for violating federal environmental law. Earlier this month, Regal Recycling and American were notified by NYLPI, NY/NJ Baykeeper, and Riverkeeper of their intent to sue the companies for violating the federal Clean Water Act by allowing pollutants to flow directly from these waste facilities into the city’s storm-sewer system which drains into Jamaica Bay, among the most valuable wetlands in all of New York City.

The process by which Int. No. 2349-A is moving through the Council has been undemocratic — unnecessarily rushed, disrespectful of the relevant Committee chair, and without sufficient opportunity for community input and meaningful review. The only hearing on the bill was noticed less than 10 days prior, with the start time being changed to early morning late the evening before– giving the community very little time to alert interested stakeholders and prepare meaningful testimony. Now, with little advance notice, Int. No. 2349-A has been aged so that it may be voted on while the Chair of the Sanitation Committee, who was the prime sponsor of the Waste Equity Law, is out of the country. The bill is also being rushed through without a single co-sponsor, which is highly unusual in this deliberative democratic body. Finally, there is no emergency necessitating the expedited vote on Int. No. 2349-A. And the speed with which this bill has been pushed through the legislative process has sacrificed necessary checks and balances that other non-emergency City Council legislation usually, and with good reason, receive.