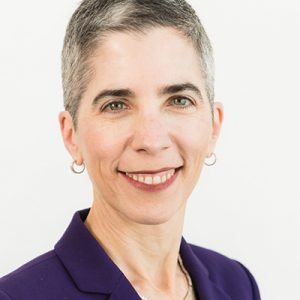 Hayley Gorenberg is the Legal Director of NYLPI, where she guides the organization’s litigation and advocacy. Before joining NYLPI in 2018, Hayley was General Counsel and Deputy Legal Director of the national civil rights organization Lambda Legal, where she litigated landmark cases advancing the rights of LGBTQ+ people, including a range of pathbreaking matters involving disability rights, health access and discrimination against communities fighting marginalization. Prior to that she ran a citywide task force at Legal Services for New York City, creating legal advocacy campaigns and training other lawyers and advocates to achieve high-impact results for low-income New Yorkers living with HIV. Hayley was named 2017 OUTLaw Alumna of the Year by New York University School of Law and received a 2018 Forger Award from the American Bar Association for “sustained excellence” advocating for the rights of people living with HIV, and in 2019 received the New York City Bar Association’s Arthur S. Leonard Award for outstanding advocacy work for the LGBT community in New York. She has served as a Wasserstein Public Interest Fellow at Harvard and sits on Princeton University’s Gender and Sexuality Studies Advisory Council. She was selected to serve on the inaugural New York State Council on Women and Girls. Hayley earned her undergraduate degree from Princeton University, her law degree from New York University School of Law, and a certificate in change leadership from Cornell University.