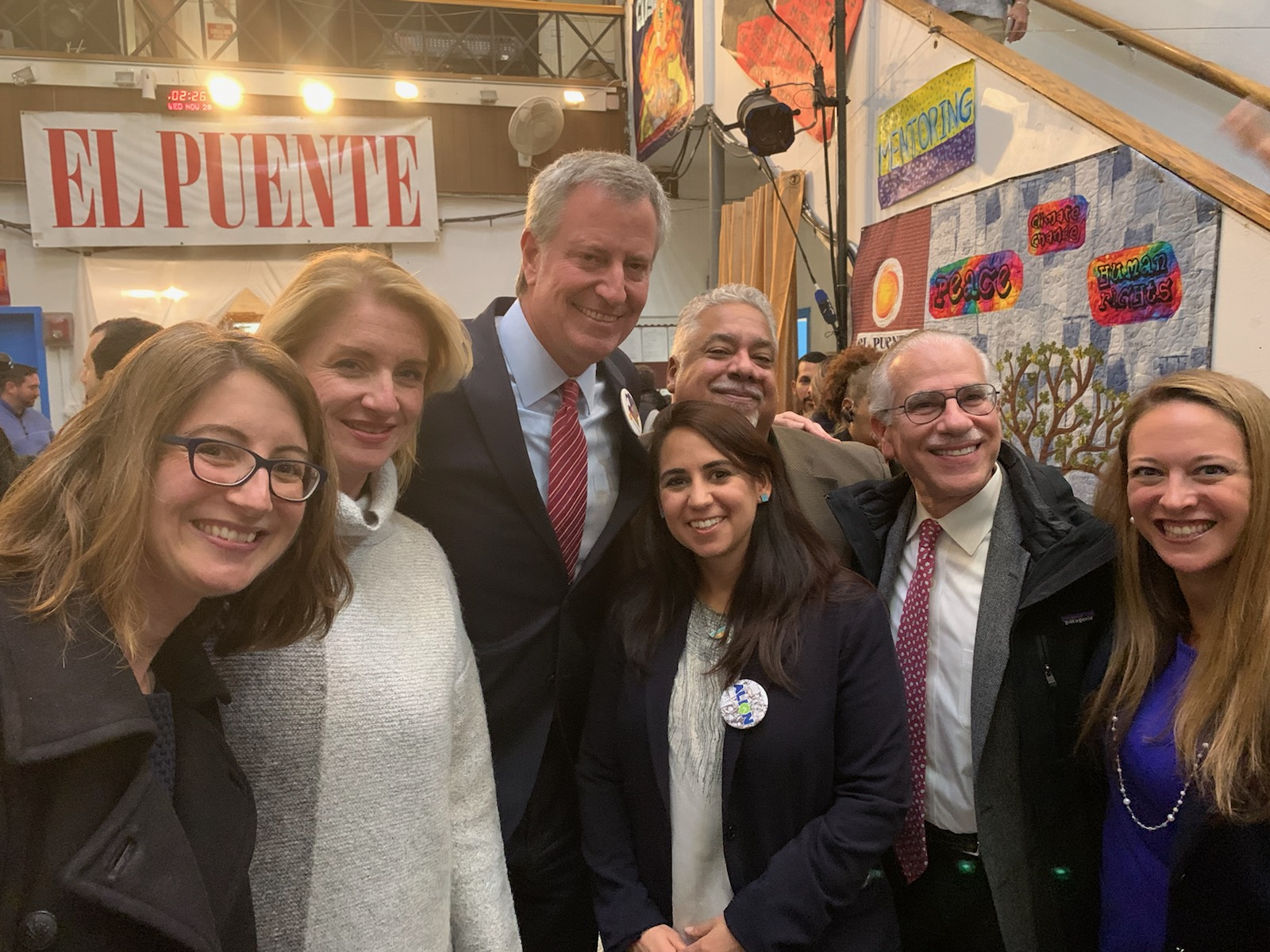 At the signing ceremony held at El Puente in South Williamsburg, Mayor de Blasio, Department of Sanitation Commissioner Kathryn Garcia, and City Council Member Antonio Reynoso, the Sanitation Committee chair and lead sponsor of the bill, all acknowledged the hard work of the Transform Don’t Trash NYC Coalition, of which NYLPI is a founding member, in advocating for and crafting the new law. The new commercial waste zone system is expected to reduce garbage truck miles in the city by 50%, increase recycling and composting, raise standards for worker safety and pay, and incentivize adoption of electric trucks and use of more equitably sited and sustainable waste infrastructure.

Legislation that will transform the city’s private waste hauling industry was signed into law by Mayor de Blasio on Wednesday.

The reforms are the first significant changes to the industry since the city implemented measures to root out organized crime from commercial waste pickup in the 1990s.

The overhaul is intended to improve safety for workers and the public, as well as cut greenhouse gas emissions and pollutants from garbage trucks that currently zig-zag haphazardly across the city by reducing how much the vehicles drive.

“We’re here today to celebrate fixing something that was profoundly broken,” de Blasio said before signing the measures in Williamsburg.

While the Sanitation Department picks up residential trash, the city currently has an open market for the collection of waste from private businesses, so dozens of different carters may serve a single neighborhood.

The routes are long, which advocates for the reforms say risk safety. Private carters were responsible for 26 fatal crashes between 2010 and fall of 2018.

One of the bills signed by the mayor requires the city to establish commercial waste zones where up to three carters will collect commercial trash. Up to five carters will also be allowed to operate citywide to pick up large containers of waste brought to a transfer station.

This means the carters would have to have their proposed routes approved by the city, and the legislation would also allow the Sanitation Department to set minimum rates that haulers can charge businesses.

Another bill signed Wednesday would boost enforcement at the Business Integrity Commission, the body created in the 1990s to eliminate organized crime and corruption from trade waste industry, among other markets.

The legislation would add enforcement of environmental, safety and health standards to the commission’s mandate, and add violation of laws impacting safety of the general public to reasons a trade waste license can be suspended.

GPS would be added on hauling vehicles under a third bill, and another piece of legislation signed by de Blasio would set fines from $1,000 to $10,000 for carting companies that have unreported employees.

Mayor Bill de Blasio today signed a bill that will fundamentally overhaul the private waste industry, capping a six-year effort by environmental and labor advocates to rein in what they have described as a chaotic and largely unregulated industry.

The bill will divide the city into waste zones that private waste haulers will have to bid to service. The competitive solicitation process will allow the city to set stronger safety, labor and environmental standards than the industry is currently subjected to. And it will end the current open-market system, where private waste companies can traverse all five boroughs in a single night to pick up their customers garbage.

“For years and years we accepted a status quo that made no sense: a private carting industry that was legendarily dangerous, that was out of control, that was harming our neighborhoods, harming our environment,” de Blasio said at the bill signing in Brooklyn.

The new law shows “we do not need to leave a status quo that’s broken — we can do something very different,” he said.

The new waste zone regime is expected to eliminate 18 million miles of truck traffic per year, a 63 percent reduction that will cut air pollution and reduce the time it takes workers to complete routes, according to a sanitation department study. It’s also expected to increase the diversion rate for recyclables and organic waste by 19 percent from present day levels.

Sanitation Commissioner Kathryn Garcia said the scope of the reform is monumental.

“We are taking on and changing everything about how this industry will function,” she said.